No running today being a taper week. I have a track session tomorrow then I'll do a bit of easy running for the rest of the week.

Here's a quick summary of my half marathon progression: 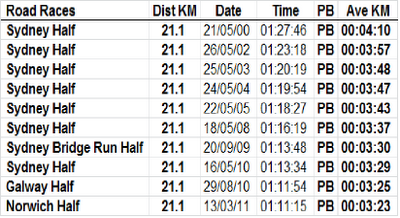 Prior to this I had run one previous half marathon (also Norwich) some time in the late 90's. It was one of those "I can do that" bets and I got round on the back of very little training in just over an hour and a half (from memory). I'll have to see if I still have the result somewhere.

Just looking at the list you can see I had a good record in the Sydney Half (the Sydney Morning Herald Half Marathon). In total I ran this race 8 times and I recorded 7 PB's.

I don't remember too much of the detail of these races. The 2002 race was a good one as I had a long battle in the Hickson Road finishing straight with my mate Johnny Gallagher. He caught me and I immediately kicked and put 10m into him which gave me the victory.

The 2004 race was also a good one as it was my first sub 80 minute run. Again at the time I remember saying in the pub that I couldn't go any quicker.

A big improvement in 2009 in the Sydney Running Festival Half Marathon. I got into a good group that day running with Saxon Moseley and Matt Palmer and although I wasn't a big fan of the course, it was nice to maintain 3:30/km pace.

Here are the reports of the Galway Half Marathon and the Norwich Half Marathon that complete the list. Hopefully I can get somewhere neat those times again on Sunday.
Posted by BeerMatt at 11:57 pm