That's about what I was doing in the build up to the half last year so I think I'm getting back to where I was. That's 8 threshold runs completed now in the last 3 weeks and I guess I have to keep building them up until I get back to an hour.

Busy with work and squeezed in another treadmill run in the evening. Pushed it a bit today but still well into the recovery zone. Time 35:57 for 10km (3:36's).

A few beers in the evening.
Posted by BeerMatt at 11:30 pm No comments:

Getting it up there

Getting tougher to get into that threshold zone - a sure sign the fitness is coming back. 33:09 for the 10km.
Posted by BeerMatt at 11:30 pm No comments:

A longer treadmill threshold run today. A total of 12kms in 39:47 (3:19's). I felt pretty good up until about 35 mins and then I was hanging on at the end. Heart rate getting up there also - a good bit higher than normal.

I had a look at my HR data from the race yesterday. Could do better. I didn't even get into my tempo zone. That's not good.
Posted by BeerMatt at 11:30 pm No comments:

A good crowd for this and pretty good conditions. After a 3.1km warm-up it was time to line up for the start. The horn sounded and Gary Thornton took the lead, with another guy in quick pursuit leaving me back in third.

That soon changed and midway through the first km I had moved up into second with Gary disappearing up the road. That's pretty much how it remained. I felt great for the first 4 kms and I was running sub 3:10 pace feeling like I could hold that for the full 8km. Then we took a few left hand turns and started running into quite a stiff breeze and I decided to slip into a pair of lead boots.

A very tough run home. Especially the long section on the main road. I finished in 25:53 after being 12:30 at 4km so a big positive split. The effort level was consistent but the breeze had me beat today. Still a good result finishing second to Gary who ran 24:34.

A 3.2km warm-down to give me 14.3kms for the day. That time is probably a fair reflection of where I'm at right now. More time needed in that threshold zone to get the strength and speed back up to where it was.

That's 75.3kms for the week. I love racing and really enjoyed that today. I think I need to race a bit more this year.

Well done to Shaun Murphy for winning the Masters. I didn't give him a hope against Robertson in the final and he won easily defeating the Aussie 10-2.
Posted by BeerMatt at 11:30 pm No comments:

Gentle 20 minute run on the treadmill (quite late in the evening). Only 4.4 kms and felt very slow. Tuam AC 8km run tomorrow.
Posted by BeerMatt at 11:30 pm No comments:

Beer intake suffering due to work

Outside for a change for my usual 11.1km recovery loop in 42:26 (3:49's). Not much else happening - no darts this evening as a busy day of testing tomorrow. Just watching the snooker as you do.
Posted by BeerMatt at 11:30 pm No comments:

Only 12kms today in total with a short warm-up and down.
Posted by BeerMatt at 11:30 pm No comments:

That's 90.9km for the week. Four threshold runs done. I reckon it will be 6 weeks at least before I get back to where I was at the end of November....

Pizza and then the annual pantomime with the kids in the afternoon. Good fun.
Posted by BeerMatt at 11:30 pm No comments:

Apologies about the infrequent blog updates - no coincidence that me getting busy at work is impacting my spare time!

Masters snooker starts today. Marco Fu hits a 147 to get things underway!
Posted by BeerMatt at 11:30 pm No comments:

I had to turn out for the darts team as they were short of numbers. I won both my pairs and singles which was a miracle considering I've hardly picked up a dart in the last month. The highlight was a 130 checkout to win my singles finishing on the bull (20-60-50). The highest checkout of the league this season!

I talked about threshold testing and Fintan couldn't talk...which is nice...
Posted by BeerMatt at 11:30 pm No comments:

I plan to run 3 or 4 of these a week for a couple of weeks and then start to up the volume (and get back outside on the road).
Posted by BeerMatt at 11:30 pm No comments:

My first threshold run since late November. Being a softy I eased myself back in on the treadmill.

Typical routine. A 2km warm-up, then 10kms at threshold (starting at 1.5% gradient and then lowering to 1% after around 6 or 7 minutes). Then 2km to finish with.

The threshold segment was completed in 33:30 (3:21's). They don't get any easier - but the thing I noticed was that I got in my zone a lot quicker today (around 5 mins). Normally it takes a lot longer so another sign I've gone backwards. But it's a start...
Posted by BeerMatt at 11:30 pm No comments:

Outdoors today to finish off the week. A total of 14.8kms in 56:22 (3:49's). My pace has slowed to get into my recovery zone and that's a clear indication that my general fitness has gone backwards. Back into it starting tomorrow...

Watched the darts final in the evening. A great game and really pleased that my tip Gary Anderson won his first world crown. Super viewing.
Posted by BeerMatt at 11:30 pm No comments:

A couple of three

No dry January for me this year. A few beers here and there just to keep the joints lubricated.
Posted by BeerMatt at 11:30 pm No comments:

Last few days of being lazy

Here are a photos from the slog yesterday (thanks Jane). The first one is just before 2km I'd say. the second photo is at the finish at the Spanish Arch. The third one is the podium. Keith a low 1:50 800m runner and Jamie a 15:04 5,000m runner so not too shabby! I like my race number (think darts). 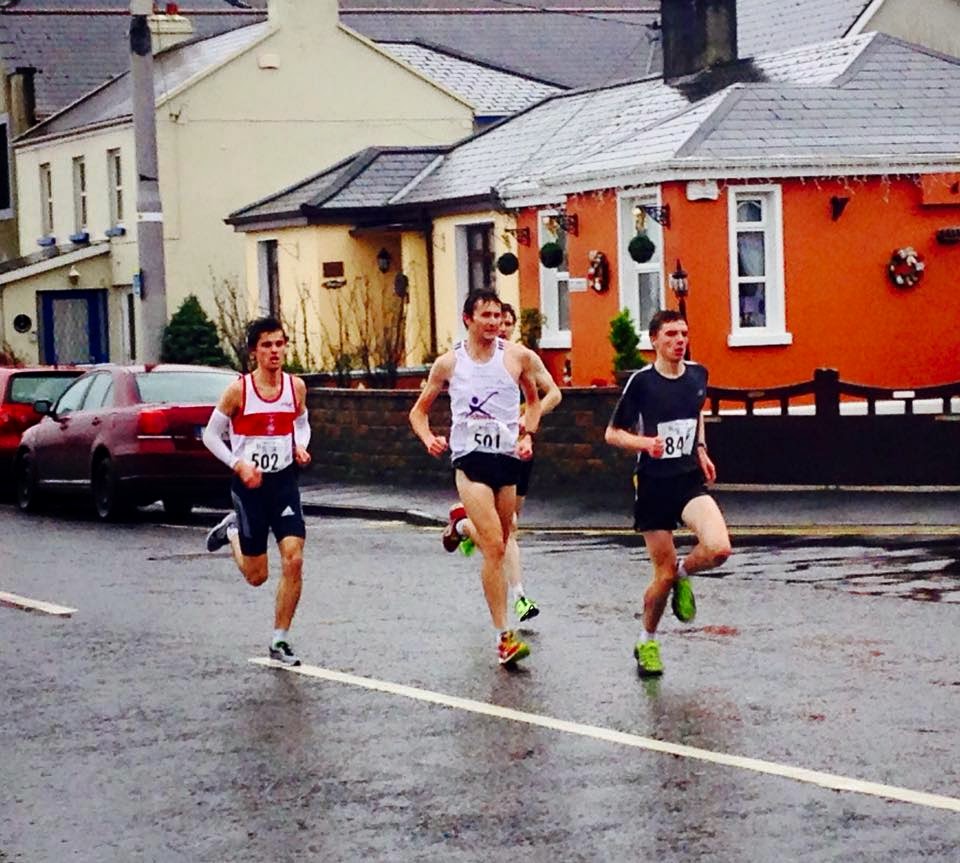 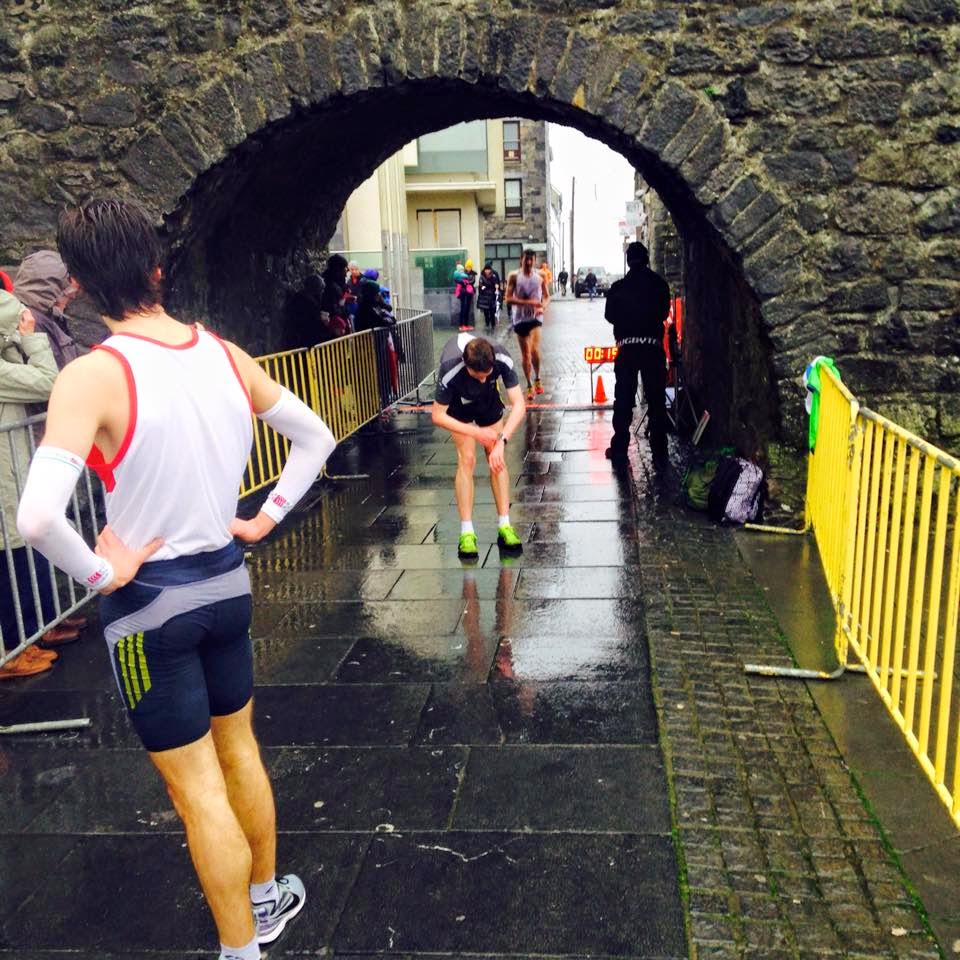 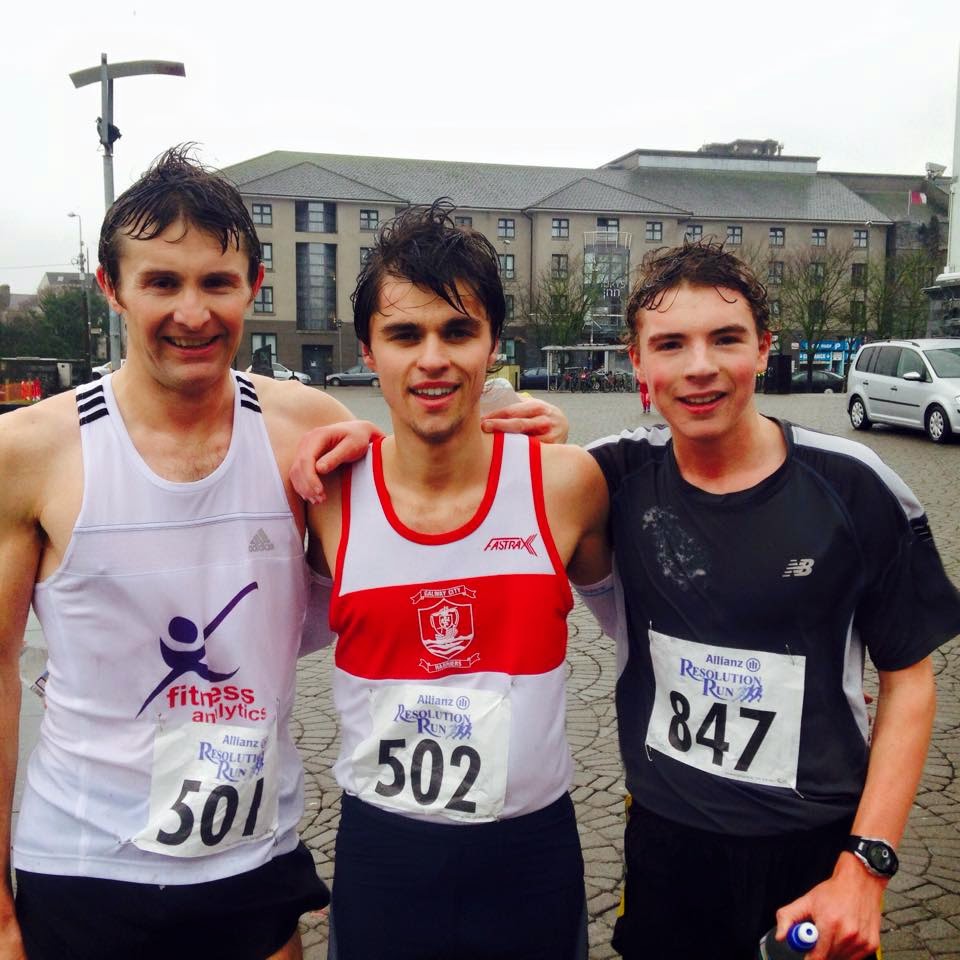 Nasty conditions for this run. Wet and very windy. Did a bit of a warm-up and lined up at the start. Lots of young guns to chase so was looking forward to a decent hit-out. The race was soon underway and I found myself in the lead group of 4 running directly into the wind.

I didn't really know the course but that initial starting 800m was very tough. Then we took a left hand turn and then we had the benefit of the wind. I put in a bit of a surge to mix things up but that didn't do too much damage with the group still staying together.

Through 2km and we were running along by the canal. Wasn't feeling great here but wasn't losing any ground and then a few right turns round by the cathedral and the car park. Keith was doing most of the running by this stage and I was hanging on with Jamie also looking good. Perhaps the group was down to 3 by this stage and I know if it came down to a sprint finish I'd be in trouble!

Then the long climb up Shop St and a right turn at Eyre Square. Still not much between us all and I think I made another move around this point but as we passed 4km and took a right hand turn towards the docks. After rounding this corner I was hardly moving. A very tough head-wind and despite a big effort, being over 6ft tall and with wide shoulders I had the aerodynamics of a bus.

Keith took up the running again with Jamie in pursuit with me now in 3rd. Some traffic to deal with and we were single file down a narrow strip of road with cars queueing in traffic. A left hand turn and Keith kicked for home. Jamie went also and I was doing my best impression of a sail in third. Having resigned to finish third I rounded the last corner and detected that Jamie was slowing a bit. I put in one final sprint but Jamie responded straight away so I backed off again and wound down the last 100m to finish 3rd in 15:53. Keith took the win in 15:45 with Jamie in second in 15:49.

Great to have a race instead of a time trial and those times weren't bad going in what must have been close to gale force winds. Well done to Keith and Jamie. That gives me the kick up the behind to get back training now!