After a late night, I woke up feeling not great. There was a 5km race on near the city starting at 1:11pm (on the 01/01/11). I decided to give it a go and I went in with very low expectations. I'm glad I did as it turned into a cracking race...

After registering I headed out for a 3km warm-up. The course was a 2.5km double-loop so I ran the loop then added a bit on. There were some new faces about and the word was that it was going to be a good standard of race.

We were soon underway and the first 400m were slightly uphill. I settled into the lead group of 5 or so, letting 2 young lads up front dictate the pace. The course was undulating and after the initial climb, it flattened out then we had a nice downhill section. The first km arrived in 3:06 and I knew I wasn't in the shape to keep that going so it was a case of hanging on as best I could. To my surprise I moved into second spot but the group remained tightly formed. The second km seemed predominantly downhill and another quick km was recorded of 3:04 so I expected a blow-up deluxe any moment.

I was flirting with the lead on the odd occasion but the whippet seemed to be doing it fairly easy. As we completed the first lap there were 2 uphill slogs and this was reflected in the 3rd km split of 3:22. At this stage the leader gapped the field and broke away by 10m or so. I wasn't feeling great and I slipped into 3rd spot and knew that any chance of winning the race was slipping away. I was hanging on to 3rd but managed to make up a bit of ground on the downhill section to move back into 2nd but was still 10m or more back on the leader. At this point I'd pretty much resigned myself that the best I could hope for was 2nd. It's at this point of the race that when you think back you wish you'd have pushed it a bit harder but I was absolutely red-lining.

The 4th km was a 3:07 and I knew that there was 2 uphill sections to come which I wasn't looking forward to. The guy behind me was right on my shoulder so the battle was still on. After the first uphill I held second place and may have even made up a metre or so on the lead runner. As we rounded the last corner I decided to kick for home. More so to protect my second position but to my surprise, I was suddenly closing in on the leader. With about 50m to go I drew level with him and I thought that would be the sign for him to pull the trigger and sprint ahead to the finish. But he didn't respond in anyway - nothing at all. So I maintained my pace and crossed the line in 15:51. Finally some great racing as opposed to a time trial.

I'm not sure where that time came from. I would have been happy with 16:30 but to break 16:00 just goes to show what you can do when you have other runners to feed off. I should mention that I have absolutely no kick so to overtake a young 'un in the finishing straight was strange.

So my first race of the year and another win. I finished up with a 2.5km warm-down so all up 10.5km for the day. 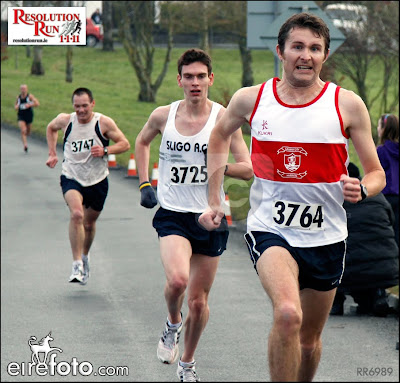 Nice one. The chap behind looks as though he should be putting more effort in!

Agree Tom. It was so odd, like he couldn't hear me coming as if he was wearing an MP3 player. But I thought he would respond in some way as I drew level. But nothing. He must have been gawne...

the mind games that must have played out in the young lads head! never quite dropping you, he mentally as well as physically caved in and surrendered!
great win, and a superb year - well done