Today was another race - originally scheduled for Boxing Day, but postponed due to the bad weather. Originally this had sold out with all 1,500 spots taken, but due to the delay numbers were significantly down - less than half that number turned up to race today.

It was a very cold day, with temps at -2.5 degrees as I arrived to collect my number and then warm-up. I was running a bit short of time so I only managed a 10 minute warm-up with a few run throughs thrown in. The race started at 11am and from the gun a small group formed at the front which I was part of. A quick uphill first km of 3:07 and it was at this point that 2 runners broke away to leave me running in third. I wasn't feeling particularly great - the race had taken the edge off me from 2 days previous and I couldn't find that extra gear to really hammer the flat and downhill sections. 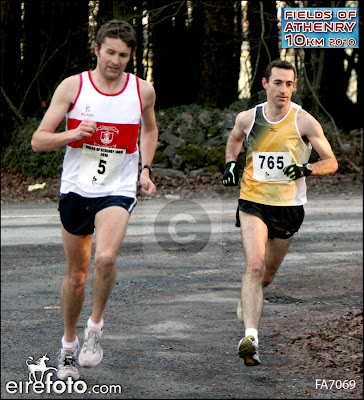 I'm pleased with the placing and the time given my training over the last few weeks. It's my second quickest road 10km ever. The placing flattered me though as if this race had taken place as was originally planned I would have been lucky to make the top 5.

Gerry Ryan won the race in 31:12 - an incredible time given that he is 47 years of age which he wasn't happy with. Second place went to a Dublin based runner with a time of 31:41. So a big gap back to me in third!

I did a couple of kms warm-down so a total of 14kms for the day.

Lots of prizes at the presentation. I picked up a crystal vase and glasses for my efforts. Another great race and has given me the hunger to try and go a bit quicker.

Darts and cricket to be watched tonight...
Posted by BeerMatt at 8:41 pm

good run Matt, must watch out for that young fella Ryan ! That's flying!