I went to see Paul Heaton last night in Tully's pub, Kinvara, Co Galway. He is celebrating his 50th birthday with a 50/50 tour. He is cycling 50 miles a day for 50 days and playing various small pub venues all over England, Ireland, Scotland and Wales.

It was a great night. He was with his band and played stuff covering all of the back catalogue including songs by the Housemartins and the Beautiful South. My favourite song of the night was "Old Red Eyes" and Paul was in great form (he has lost a stack of weight) as were the band who were fuelled by numerous free drinks (see below). Ouch.

On the running front I rolled out another 11.1kms in 46:41 (the same run now 3 times this week). Rest up tomorrow and race Sunday.

Here are a couple of dodgy gig photos. The first one is a tray of Jager-bombs; the second of Paul and the band: 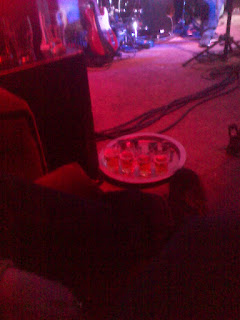 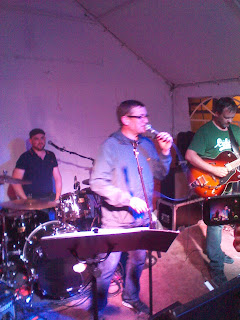 He is one of my favorite vocalists and I too love Old Red Eyes!