The knee had been behaving, I'd lost a few kilos, I felt like I was coming into form and the conditions looked pretty good. So no excuses at hand. I'd not raced in Gort before so I was looking forward to covering some new ground and there was certainly a nice friendly vibe at the registration. A 3km warm-up with Owen where we encountered a few tough hills (more on that later), and it was almost time to line up. Michael Shannon was running and we had a quick chat and it turns out he has been struggling with injury the last couple of months so it looked like I may give him a decent race for a change!

The race started in town and we had a nice downhill start where a guy from Ennis track took the lead and I settled in behind him. After about 400m I decided to push on and took the lead with the rest of the field in pursuit. We took a left turn and then hit the first km marker and whilst this section of the course was flat enough, we were running into the breeze. I was feeling good and had a quick glance at my watch at the 2km marker and the split was a little disappointing but I was still leading with Michael right behind me.

I don't recall the detail of the course but mid-way through the 3rd km we took another left turn. I was still plugging away but not surging and upon reaching the 3km point I was starting to think that Michael was going to stick with me until the last few minutes and then put in his customary quick finish. That didn't happen and at about 3.5km I started to open up a gap as we took another left turn onto a busier road. At this point it was foot down with wind on the back and it was soon apparent that I was out in the lead by myself.

At around 5km we were back in town and there was some great support from Fintan and his kids. Then the fun started - I was directed up the section of road I'd covered during my warm-up so knew straight away this wasn't going to be fun. I lost a lot of momentum going up the first hill and in the space of a minute I'd gone from feeling great to feeling very ordinary. At the top of the hill I had nothing left to push on and had to take a further 5-10 seconds of recovery before attacking the downhill section. Then another climb before a left turn and then the 6km marker arrived and having missed the 5km split the time for the last 2km seemed decent considering the hills (6:36 - I'd guess 3:10/3:26).

This gave me a bit of a lift and the old thought of "keep this going for 6+ minutes and you'll be home and hosed". The 7th km was certainly flatter and I'd convinced myself that the last km was going to be a quick one. Not on your Nelly - it was a very nasty climb up past the 7km marker and again on reaching the top and making a left turn, I had to recover again before lifting the pace for the run home. This section still felt tough - perhaps into the breeze and then a few more turns and another drag before the run down the finishing chute.

I crossed the line in 26:04 for the win with my team-mate Owen coming in second. It turns out that Mike had pulled out of the race around 3.5km and I hope that he didn't aggravate his injury and wish him a speedy recovery. I'm delighted with that result - especially the time which was 42 seconds quicker than last week. The course and conditions were certainly better than Maree but I wouldn't say the course was an easy one - some very testing hills between 5km and 7km which left me thinking that I still have more to come. My "race yourself fit" strategy seems to be working...

Here's a photo of me on the course courtesy of South Galway AC. As you can see I'm wearing my away strip for a change: 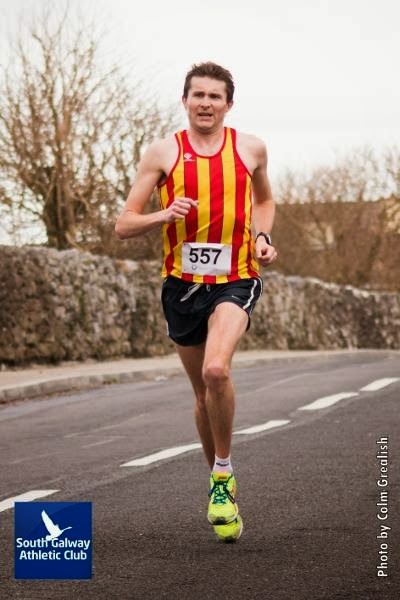 All in all a very enjoyable day. Great organisation from South Galway AC and they must have been delighted with how the day panned out. It certainly got a big thumbs up from all the people I spoke to so credit to the organisers.

That's 93.9kms for the week. Very happy with how things are progressing at the moment.

Here are the splits from the race:

Total 26:04 (note even splits - pleasing given the tougher second half)
Posted by BeerMatt at 11:30 pm