Disappointing. I couldn't even manage one pre-race night of no beer...perhaps it helped?

Anyway I was up early to get the bus from Galway out to Leenane which was the starting point for the half. The journey of around an hour soon passed and it gave you a good idea to assess the terrain as we drove some of the course. Rolling hills and warm sunshine were the order of the day.

Upon arrival I was to get an appreciation of the magnitude of this event. There were runners and walkers everywhere waiting patiently for the 12pm start. I took the chance to get ready - sort out race number, timing chip, get changed, put my bag in the truck and then after a slow 2 mile warm-up it was time to make my way to the start.

A few familiar faces at the start and after a bit of chat we were all underway. I went straight into the lead and after crossing the bridge in town, then taking a left turn, it was time to tackle the first hill. I'd decided to take the hills easy enough, and then run the flatter sections of the course at marathon pace (around 5:40 per mile).

The first hill was a tough one and must have lasted well over a mile. I had already opened up a decent gap on the chasing runners and upon reaching the summit I settled into a nice rhythm which felt very comfortable. The course itself was point-to-point finishing out at Maam Cross which meant that most of the running today was directly into a breeze. To make matters worse, the temperatures were hot and you could really feel the heat of the sunshine as most of the course was very exposed.

The scenery was pretty spectacular - hills, valleys and water views and as picturesque a race as I can recall. The terrain was undulating with constant slight uphills and downhills. At the 3 mile mark I took on some water which I would never normally do for a half - that was a measure of how hot it was. I concentrated on following the lead bike and at around 5 miles there was a nasty climb, followed by a steep descent which really had you working.

At 6 miles I took on more water. My splits seemed consistent and I tried to stay as relaxed as possible and enjoy the race. I was overtaking walkers who had started an hour earlier, plus a few of the marathon runners who were on sub 3 hour pace who were running the same route. This at least gave you something to focus on. More water at 9 miles and barring any disaster I had the race in the bag. After taking a right turn it was time to tackle the last hill and it was a beauty lasting the guts of 2 miles. I decided not to push too hard, and upon reaching the summit it was then a very nice descent of around a mile, followed by a fairly flat last mile to the finish line.

I really enjoyed the last section as there were lots of spectators and a good atmosphere down at the finishing chute. I crossed the line in a gun time of 1:14:30 to give me a comfortable victory. A good win when you consider there were over 2,000 runners in the race.

So today I managed to tick all the boxes. I ran exactly the time I was after and also won the race in the process. I finished up with a slow 3 mile warm-down with Enda who had a great run to secure second place.

A great event which is superbly organised and is very unique in its nature. I'd recommend it to anyone looking for something different but it's not a course to go for a time on!

Just a quick mention to the guy who won the ultra event (39 miles or 1.5 marathons). His name is Georgio Calcaterra and he is the current 100km World Champion. He seemed to be doing it easy knocking off the 39 miles in 3:56:56. That's 3 by 1:19 half marathons back-to-back. Incredible.

Here's the first photo (thanks to Jane Walsh). The scenery looks much nicer than me: 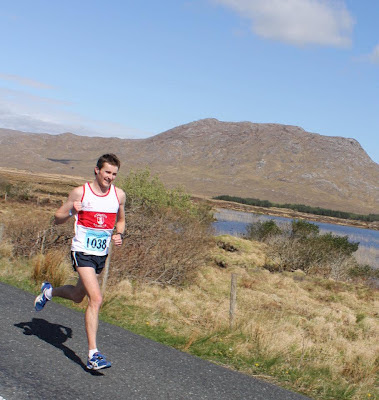 Here are the mile splits from the Garmin which measured the course at 13.22 miles:

Congratulations. Good time on a course with one- and two-mile hills!

Well done Matt, super performance.
Your flying fit.
It was a tough course but, lovely scenery.
Will give this race a go again when i,am firing fit.
Started an inhaler 3 days after this race so, used it more as a long Tempo/strenghtening run, so pleased with 3rd after.
Interesting to hear you measured it a bit long.
40 secs off ours times i reckon, if thats the case?.
added bonus!
Best wishes for London and congrats on a great win in this.

Thanks for the comment Martin. I think the reason the course measured long was that I stayed on the driving side of the road, whereas the course would have been measured using the full road. Plus the GPS isn't 100% accurate. A good run from yourself. I hear you had a good battle with Enda! Do you have asthma? Hope to see you at a race again soon! Matt