The week that was in a nutshell:

It's fair to say I had a pretty easy week leading into the Streets of Galway! The legs weren't right after the half so a few easy days were certainly called for. The weather on the drive in to the city didn't look good - very wet and windy and not what you'd want. Still that didn't put people off with well over 2,000 people lining up for the start.

I had another one of my shocking starts (not paying attention) but soon got into my running with a quick first km (3:01). The second km is a bit tougher as you climb up to Eyre Square and at this point I was in 4th position with the top 3 disappearing up the road in front of me. Running around the Cathedral I was joined by 2 other runners - one from Finn Valley (Gerard Gallagher) and a fellow GCH athlete (Mike O'Connor). A good second km also (3:10) and then it seemed to get a bit tougher - maybe the wind was a factor?

Our group stuck together until around 4km where we took a right hand turn up to Devon Park. A tough climb and that left me and Gerard to fight it out for 4th position. My plan was to hang on until we got down on the prom and then I'd look to push for home with a quick final 2km.

The pace had slowed and I was pretty much running 3:15's for kms 3 to 6 but upon hitting the prom the pace lifted with the benefit of a strong breeze on the back. Still running side-by-side with Gerard and I tried a few token surges which were quickly covered off. Upon reaching the 7km mark (3:06) I then tried to lift the pace but I was on the limit and there was nothing in the legs. By 7.5km I was toast and I had to sit-back and watch Gerard work a gap of a few metres. That last stretch seemed to last forever and I kicked for the line to finish in 25:25 (a 3:03 last km) to end up in 5th place.

A PB of 11 seconds but to be honest that was soft as I've run quicker than that at the 8km mark of a 10km race. But I'll take it! I'd say there is more there on fresher legs and maybe in better conditions - next year! That said I really enjoyed that and it was great fun to be racing properly and pushing yourself to the limit. I checked the heart rate data and that's the highest I've put my heart rate in any race before - maxing out at 159.

I received fantastic support on the course and I'd just like to thank everyone who gave me a cheer - it certainly makes a difference! Here's a photo of me looking a little worse for wear before the race! 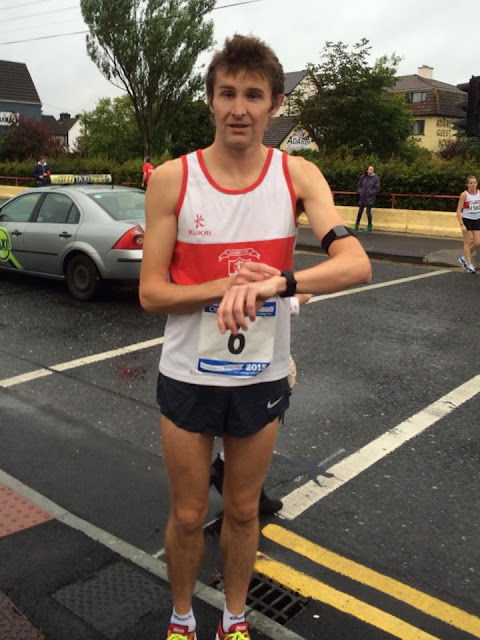